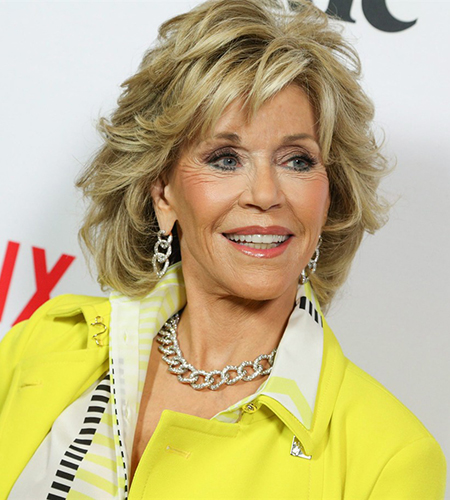 Join us for a ‘once in a lifetime’ season kick-off event presenting a legendary star of stage and screen. Jane Fonda has an award-winning career that has taken her from Broadway to Hollywood and beyond. Fonda also revolutionized the fitness industry with the release of Jane Fonda’s Workout in 1982. She followed with the production of 23 home aerobic videos that transformed generations. Her honors include two Tony nominations, seven Academy Award nominations, an Emmy award, the Honorary Palme d’Or from the Cannes Film Festival, and the American Film Institute’s Life Achievement Award. Currently starring alongside Lily Tomlin in Netflix’s critically-acclaimed 5th season of Grace and Frankie, they bring hilarity while exploring LGBT issues and senior angst. The Wall Street Journal raves about the show’s “refreshing, acerbic, and buoyantly warmhearted” qualities.

Beyond her acting career, Fonda has also been one of America’s most outspoken social and political activists, advocating for social justice and women’s empowerment since the 1960s. Most notably, in 2001 she founded the Fonda Center for Adolescent Reproductive Health at the Emory University School of Medicine, which helps to prevent adolescent pregnancy. “Over the years and in many diverse cultures, I have seen again and again how important it is for teenagers to be empowered with accurate information about their bodies, their sexuality and the skills to exert agency over this aspect of their lives,” says Fonda. “I have also learned that professionals whose job it is to work with youth have rarely received training specific to this unique developmental stage. For these very personal reasons, I am excited to be partnered with the Department of Gynecology and Obstetrics at Emory University, one of the world's leading universities, in providing research, education, training, and inspiration to those who guide young people as they develop and mature.”

In 2005, she also cofounded the Women’s Media Center alongside Robin Morgan and Gloria Steinem. “When one part of humanity’s voice is missing, when women’s voices are stifled or inaudible, everyone suffers,” she said in an interview with the Harvard Business Review. “How can we understand the world in which we live—what is wrong with it, what is right with it, how we can make it better—if we don’t hear the entire story?”

In addition to her own organizations and foundations, she sits on the board of Women and Foreign Policy at the Council on Foreign Relations and served as UN Goodwill ambassador.

Be with us as Fonda shares her candid, off-screen views on where she’s been, what she’s learned, and what we are confronting in America’s cultural and political landscape today.