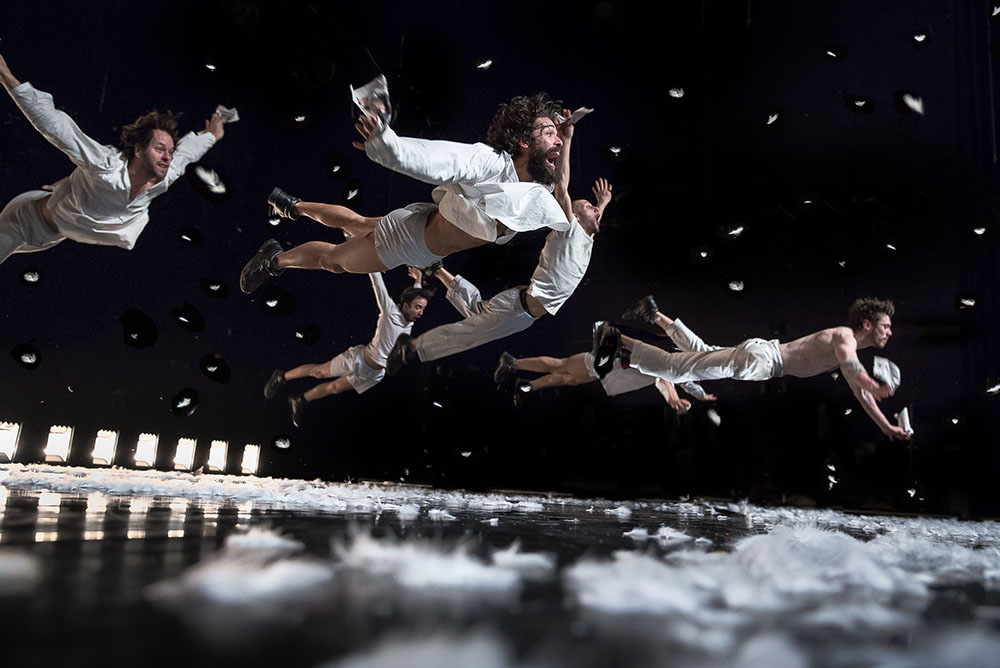 One of the most wildly energetic, bizarrely conceived dance pieces to have landed on a local stage... - William Littler, The Toronto Star

In 1999, In Spite of Wishing and Wanting caused a huge international stir. For the first time, Wim Vandekeybus created a performance not about the chemistry between men and women, but a primal desire in a world of men alone – fierce, wild, naïve, and playful. The performance derives its power from the organic symbiosis between dance, theatre, and film. Captivating dance sequences underpinned by the sensual soundtrack by David Byrne, founding member of Talking Heads, dissolve into monologues on fear, the desire for security, and the dreadful magic of sleep. Accompanying the performance is the short film entitled The Last Words, made by Vandekeybus himself and based on two stories by Julio Cortázar.

Wim Vandekeybus’ first show, What the Body Does Not Remember, was an international success, earning him a Bessie Award (New York Dance and Performance Award) for its innovation. Throughout the creation of his company Ultima Vez, 30 years of new works, and a whole series of films and videos, Wim Vandekeybus is still searching for novelty and innovation. In all these very different productions, Ultima Vez nevertheless remains true to its own movement idiom – tension, conflict, body versus mind, risks, and impulses. Physicality, passion, intuition, instinct: These are essential elements that will always be part of Vandekeybus’ work, giving a completely different appearance in each instance.

Pages would be lacking to sing the praises of the original soundscape by David Byrne and the convincing interpretation of all the dancers. Thus we will confine ourselves to strongly recommending this original performance, so difficult to explain In Spite of Wishing and Wanting to do so.- Marjolijn Van der Meer, La Vanguardia