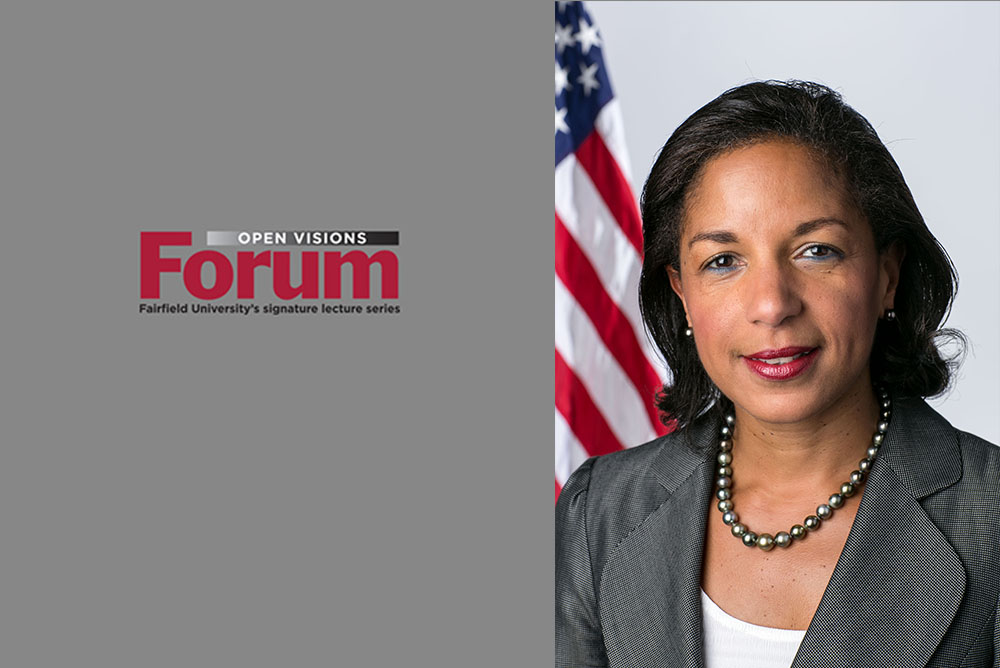 If you choose not to attend, we are happy to offer a full refund for your tickets. Please contact the Quick Center Box office at 203-254-4010 or boxoffice@quickcenter.com.

A Truman Scholar at Stanford University, she earned her BA Phi Beta Kappa. Awarded a Rhodes Scholarship, she completed her doctorate at Oxford University and served on the National Security Council of President Clinton. In 2008, she was nominated by president-elect Obama to be America’s United Nations Ambassador, becoming the second youngest person and first African American woman to represent the United States in that capacity.

“How fitting at this moment in time to pivot and launch our season with a high level diplomat of Ambassador Rice’s stature,” notes Open VISIONS Forum founder/moderator Professor Philip Eliasoph.“We are anticipating a forward-looking presentation where Ambassador Rice will offer us a current state of the world review from her very unique perspective. Let’s expect her to outline some positive targets in the current news driven landscape that appears entirely ‘up for grabs.’”

From January 2009 until assuming the role of National Security Advisor in July 2013, Ambassador Rice served as the U.S. Permanent Representative to the United Nations and a member of President Obama's Cabinet. At the United Nations, she worked to advance U.S. interests, defend universal values, strengthen the world's common security and prosperity, and promote respect for human rights. Under Ambassador Rice's leadership, the U.S. Mission to the United Nations helped win the stiffest UN sanctions ever against Iran and North Korea, unprecedented action to prevent the proliferation of nuclear weapons and materials, support for life-saving interventions in Libya and Cote d'Ivoire, cooperation on the referendum for independence in Southern Sudan, vital UN assistance in Afghanistan and Iraq, stalwart support for Israel’s security and legitimacy, and progress on reform of the flawed UN Human Rights Council. In a world of 21st-century threats that pay no heed to borders, rebuilding a strong basis for international cooperation has helped the United States tackle its foreign policy priorities and make the American people safer.

Ambassador Rice received her M.Phil (master's degree) and D.Phil. (PhD) in International Relations from New College, Oxford University, England, where she was a Rhodes Scholar. She was awarded the Chatham House-British International Studies Association Prize for the most distinguished doctoral dissertation in the United Kingdom in the field of International Relations. Ambassador Rice received her BA in History with honors from Stanford University, where she was named junior Phi Beta Kappa and was a Truman Scholar. Ambassador Rice is a native of Washington, DC, married to Ian Cameron, and the proud mother of two teenage children.

In 2017, French President Francois Hollande presented Ambassador Rice with the award of Commander, the Legion of Honor of France, for her contributions to Franco-American relations.